A Dream in the Making by Kody Meyer

It all started a year and a half ago, when I received a phone call from someone offering me a job in Wyoming, the crazy thing is I hadn’t even applied for it. Before making a decision I called my dad for some advice, when I asked him what I should do, he told me that I should go for it while I was still young.

Three weeks later I was on the road to Wyoming to start a new chapter in life. I arrived a few months before hunting season but due to Wyoming residency laws, I would have to wait a year before I could buy a deer tag, but that didn’t stop me from getting out and scouting and helping my dad on his hunt since he was already a resident. Before I knew it, September was upon us and we were in the high country. The first three days of the hunt it snowed like crazy which was good for us since my dad and I both had to work. As luck would have it, Friday morning as we started our hike to the basin we planned on setting up camp in, the storm let up and the sun came out. On the hike in my dad passed up a couple nice 170 class bucks in hopes of finding something a little better in the basins we had scouted, We made it to camp around 11 am but before we set our tents up, we decided to relax for a minute and glass. Immediately I spotted two small bucks out feeding in the open I looked them over and continued glassing. Next thing I knew my dad said “BIG BUCK” and to my surprise the two tittle guys had a friend. He wasn’t out in the open so he was hard to see in the timber but we could tell he had a good frame and a cheater off his right side. We looked at each other and said “lets go!”

It took about an hour to get to a spot above the bowl he was in to get a good vantage point. To our surprise, the bucks had fed down the mountain and into the wide open below us. I quickly ranged the buck as my dad was getting set up for the shot. I called out the range at 340 yards and before I knew it, the shot rang out and the buck didn’t take another step. We looked at each other in disbelief. We couldn’t believe it had worked out the way it did. After a good photo session and a little knife work, we were on our way off the mountain with a beautiful 190”+ buck. 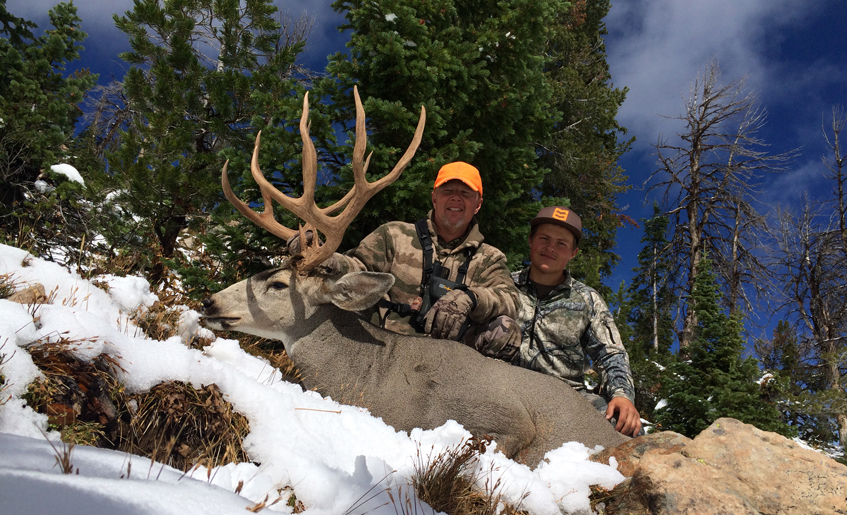 Fast forward ten months and we were back in the high country looking for big velvet bucks. On the 4th of July I was able to locate a couple of bucks with good potential. One was a big heavy framed buck and the other was the deer I ended up spending most of my time watching. He was an old, heavy deer with an inline on his left side. I scouted as much as I could but I had also drawn a limited quota elk tag in an area I had never been, so my time was split scouting deer one week and scouting elk the next. When September rolled around, I spent the first five days hunting elk with no luck. The following weekend found me in the high country one last time trying to locate the inline buck from my earlier scouting trip, but unfortunately, I wasn’t able to locate him that day. I was, however, still planning on hunting that particular basin on the opener in hopes he would show up.

Work that week seemed like it would never end as I was so excited for my chance to finally hunt the Wyoming high country for myself. Friday had arrived and everything was packed and ready to head up the mountain for several days. At around noon, my dad and I found ourselves at the trailhead ready for the long hike. After about two hours of hiking, we made it to where we planned to camp. We got everything set up and filtered some water and it was time to glass for the remaining hour of light. We ended up turning up six different bucks but nothing that got us excited. That night, even though I hadn’t seen either of the two big bucks I scouted in the basin for a few weeks, I still couldn’t sleep due to being so exited for what the morning may bring. I was like a kid on Christmas Eve.

Finally, opening morning was upon us. My dad and I made the 45 minute hike to our vantage point well before light. As the sky began to get light, I glassed up a buck bedded 250 yards below us. I could tell it was a decent buck but at the time I wasn’t sure. I told my dad I was going to pass cause I still had hope of turning up the inline buck. My dad looked at me and said “are you stupid? You need to shoot that deer.” About that time the buck got out of his bed due to the fact that another hunter was hiking up the bottom of the basin. As the bucks were headed out, I quickly changed my mind and laid down for the shot. The only problem was they were headed straight away from us. After what seemed like a lifetime, the buck finally turned and stopped. I ranged the buck at 508 yards. I dialed the scope, got back on him, and let one fly. Next thing I knew my dad said , “you smoked him! He’s rolling down the rockslide.” I couldn’t believe it, after waiting all that time, to have the hunt end the first hour on the first day was kind of crazy. My dad was just as excited as I was. After several high fives and a hug, we gathered our things and headed down from our vantage point to go see my first Wyoming high country buck.

As I walked up on him, I couldn’t believe the mass. Every time I looked at him I got more and more excited. As it turned out, he was the big heavy framed buck from summer scouting. I honestly couldn’t believe I almost passed this buck. The buck ended up scoring 177 5/8 but the score and pictures don’t do him justice in my eyes. He was just over 28” wide with 6” first mass measurements and 9” buttons. Looking at his teeth, we figure he was at least 7-10 years old. A true Wyoming monarch and I couldn’t be happier with the way it all turned out with my father by my side. 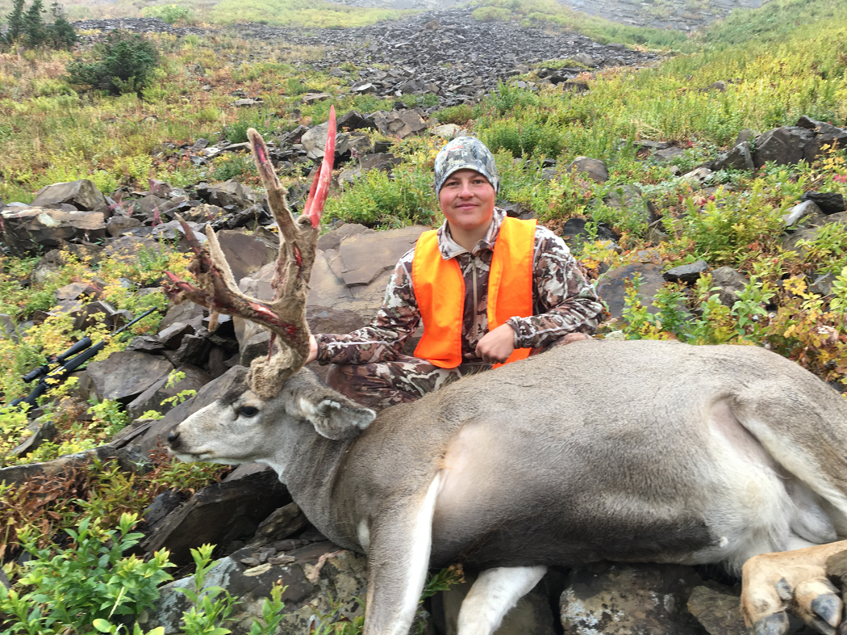