This adventure started out with drawing a limited quota deer tag in Wyoming (2013).   I had been putting in for four years and finally drawn the tag.  From the time I found out that I had drawn the tag, until it opened, I scouted the area with my good friends and family looking for trails, studying the country and trying to figure out the mule deer in this area.

The weather in Wyoming that year had been just crazy.  From flash floods tearing up the town I preside in to snow/rain storms every few days up in the high country.  Almost every trip out starting mid September had horrible weather and snow storms.

I was watching the weather mid October online and saw a big snow storm coming in over the weekend.  Figuring that less people would be going out I decided to load up my two mules and head for the high country in pursuit of a monster muley.  The storm was supposed to hit full fledged by that Sunday so I figured if I could hunt a few days before the storm hit, that I would see a lot of deer activity. 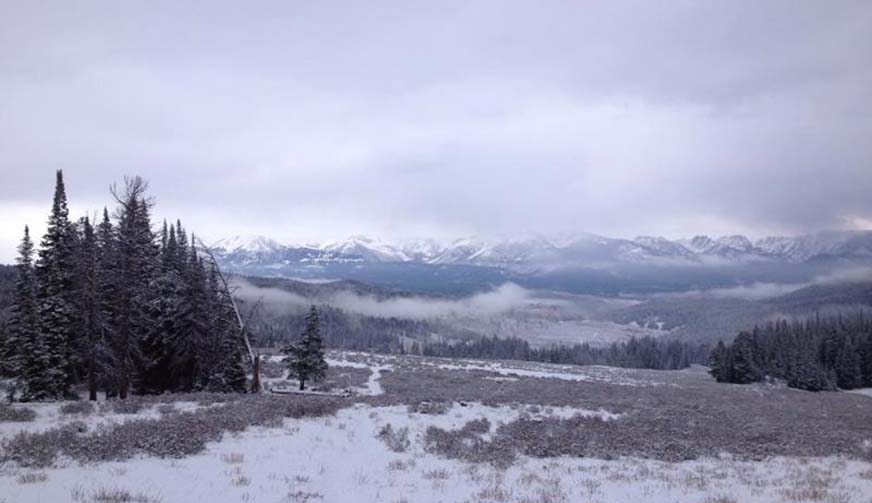 I arrived at the trail head and realized the storm was moving in faster than anticipated.  It was already lightly snowing but I knew this would only help my chances to find a big ‘ol solitary mule deer.  I rode in approximately six miles, and on the way in, I spotted a dozen different does feeding out on the open hillsides.  I finally spotted a lone deer at about 800 yards in the light snow storm shortly after.  I bailed off my mules and of course was in the middle of an opening with nowhere to tie them up.  I got about a three second look at this deer which was enough to see he was a buck, but I couldn’t really tell for sure how big or what caliber.  I grabbed my custom 7mag with a Huskemaw on top and started to consider my options. Was he a shooter or not?  At this time the deer had already walked into the trees around the large ridge I was watching him on.  I may have just lost my opportunity with this guy and I still wasn’t even sure if he was a shooter.

I decided to jump back on my mules and keep riding out of this large meadow and find a place to call home for the weekend.  I set up my spike camp on top of the ridge where I had seen the deer on at about 9,800 feet, unsaddled my mules for the afternoon and decided to walk approximately a mile and a half to where I had last seen the deer.  I wanted to see if I could see him feeding around the hill or if he was even worthy of pursuing further.  If he wasn’t a good mature buck, I would let him walk. 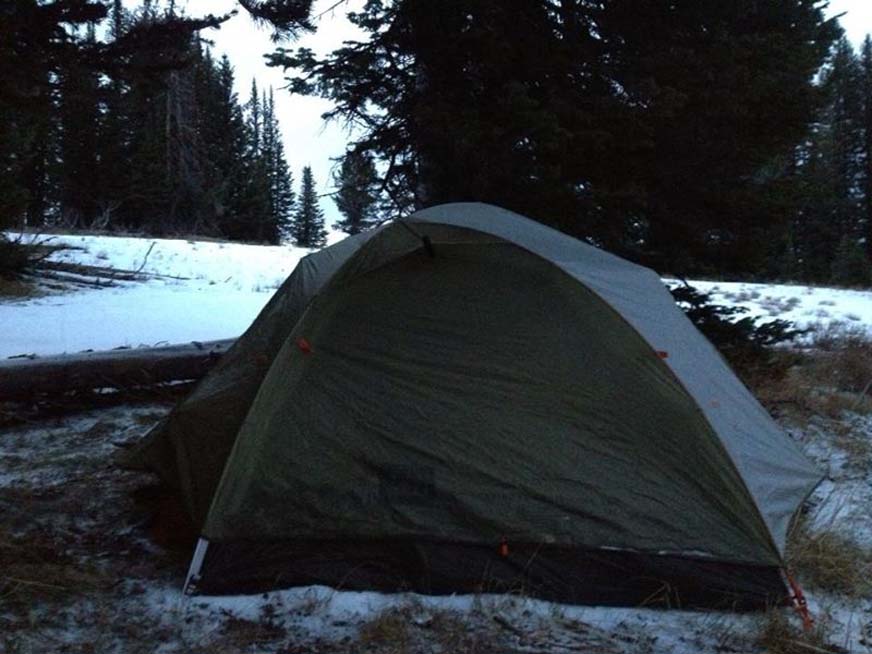 As I was walking down the ridge in the light snow, I spotted a doe and fawn feeding about 250 yards from where I had last seen the buck.  This naturally slowed down my pace hoping not to bump them as I kept my eye out around the corner for the buck.  I stayed low and eventually circled around the doe and fawn towards my destination.  Just after I got around them, I caught sight of a white spot through an opening in the trees.  To my surprise, it was a bedded buck’s white throat patch and he was staring directly at me 250 yards away.  I immediately noticed his large forks and mass. He wasn’t very wide but he was tall.  I couldn’t believe that the buck was still laying there just staring at me though a small window in the trees.  He was about 50 yards from where I had first seen him and he decided to bed down in the snow storm.  I took off my backpack, binoculars and my Huskemaw scope coat.  I made sure to dial my Huskemaw to 249 yards and decided this was the deer I had been looking for. This would be a buck of a lifetime for me if I could just hold myself together.  I got into position and once I felt comfortable, I squeezed the trigger.  Immediately, the buck laid his head down to rest. I had taken him in his bed and he didn’t even flinch.  I grabbed my gear and began a fast paced walk in his direction, still somewhat unsure how big he actually was.  When I arrived to him I realized instantly he was a great buck and he was a true blessing from mother nature.  I was so thrilled to have done this by myself, along with my mules, which I truly trust with my life with in the high country during such a snow storm.  This for me was a true blessing and an honor, and was very humbling and a true detox for my mind and soul. 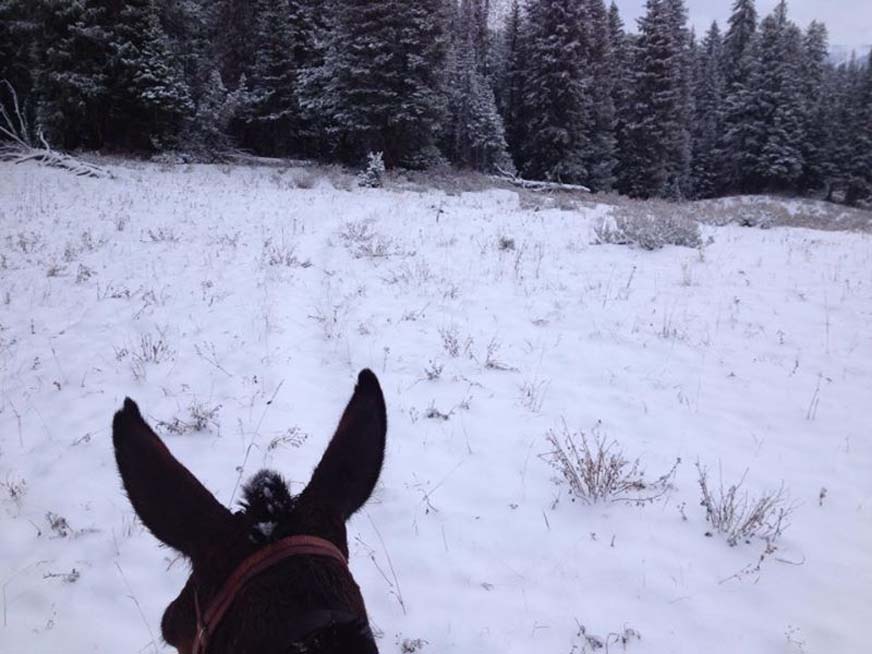 After breaking down the buck  and hanging him in a tree to keep the wolves and grizzly bears from getting to him, I hiked back to camp and attempted to sleep through the snow storm.  The next morning I woke up to six inches of fresh snow.  With a smile on my face, I packed up my camp, rode a mile and a half, loaded my 194” deer and began the ride out.  It had been a short time in the mountains on this trip, unlike all of the other trips that year, but it was a great experience. 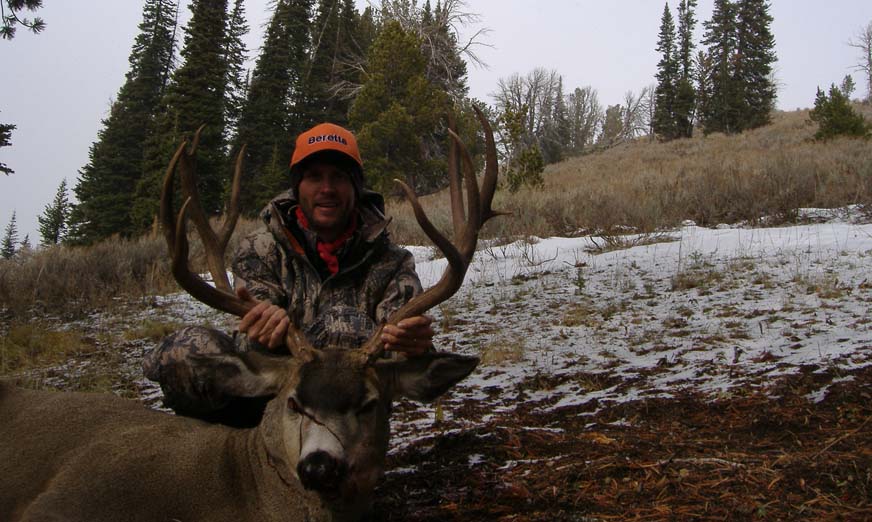