Hunter for Life by Warren Hatcher
Blog #3
SHED SEASON
This a busy time of year for the Western Hunter. Shed season is open for most areas either by legal start dates or snow leaving the country. I’m not sure what exactly has caused the boom in participation for this activity but there are a lot of folks doing it. To some it is the dollar incentive, some want to “find the big one”, some the highest shed total and others just enjoy the excuse to be outside and hiking with a purpose. At various stages of my life I have been all those. Now of course, I wish I had kept them all. But the dollars raised thru selling sheds were reinvested in hunting trips and gear. I know of guys who have never sold a shed and have literally tons stashed away on their property. Several more have only sold smaller finds and have a large selection of big deer and elk antlers. 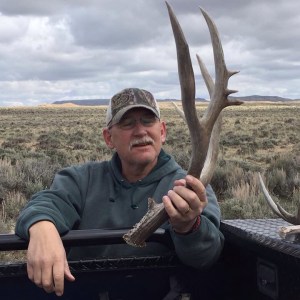 With today’s pressure of increased shed hunters and generally lower buck and bull numbers it would be hard to begin a collection of big stuff. Western Wyoming now has a May 1 opener for all shed hunting to prevent pressure on the winter grounds. From my observation it has helped the deer but not the ethical shed hunter. May 1 you will find week’s old boot, horse and ATV tracks. I do believe the unethical, those same folks “who would do anything to get the horn,” are still doing so. Prior to the shed season it was common practice for guys to “sit on” and watch large bucks for days on in until they shed. No doubt it kept a lot of poaching down, but also meant the larger sets went to the guys who would devote the most time and effort. I see nothing wrong with that. Sure the out of towner was at a disadvantage, and many complained bitterly, but how could they justify themselves? Regardless those days are over here and the big sets will go to the very lucky legal shedders or the unethical early shed poachers.
In the heyday of shed hunting I never had the success of some but I’ve invested days following “my buck”, keeping tabs on him so I could be sure to pick up his set. The last buck I chose was a one I called ” Whitey Bob”. So named because the black end of his tail was gone and he just had a bobbed off white stub. Those who have spent any time keeping up with a particular buck for the shed hunt know you must have unique markings memorized such as a notched ear or unique markings so you recognize him bald headed. With this buck’s caboose I had no doubt but I could i.d. him after he dropped. He would be the buck that changed my perspective on shed hunting.
He was a good buck but not such a great deer that he would attract a lot of attention or competition. A bonus was he was wintering right in my work area so I could keep tabs on him several times a day. This was shaping up to be a cake walk shed gathering adventure. I kept detailed notes on his feeding times, where he browsed as the winter progressed and the bucks he hung with. He stayed in the same ½ mile area for weeks. One morning he had a noticeable limp. A look thru the spotter confirmed he was injured in a hip. The broken sticker points indicated he may have fallen in the night on a steep rock face he frequented. His health began to decline in the coming days. Then came a big blizzard where I could not get to his area for a few days. When I did get back to find him, he was missing one side and appeared even leaner. I kept a closer eye on him to drop the remaining horn the next few day, the next several days and then the next several weeks! He was still packing his last horn into April when you couldn’t even find a forky with head gear. His health continued to decline, the horn bleached white on his head. The deer began to migrate back up country and eventually I couldn’t locate him.
I began to look for the side he lost during the blizzard. I had determined by sign after the storm that he had not wondered very far during the storm. The area was quite cliffy with scattered chutes and I knew it was there somewhere. I walked it after work every day and at lunch for weeks. I hunted so late into Spring that skeeters were chewing on me. Finally one day I hooked a boot toe onto a notch and peeked up over onto a hidden foot wide shelve. There it was! I had walked within feet several times in the past weeks. But until I took a slightly different perspective it was totally hidden. I held and marveled at the object I had so much effort invested into. I was glad to have found it, but was it really worth it all? Why I had become so obsessed with this one buck? I suppose it was because I thought it would be an easy no pressure pursuit and as it became more challenging, I could not let it go.
Weeks later I heard a fellow had walked up a draw a bit further up country and found a dead buck that had cast his 1 horn where he died. I met up with him and offered to exchange a very heavy, nice brown I had for his very bleached out mid 170”s type horn with a few sticker points. He couldn’t understand why I wanted it so bad but quickly accepted the trade. Though I have sold off much bigger sheds I still have that matched set. There is something to be said for the harder it is to achieve, the more valued the prize.
Shed hunting for me these days is getting out with the family on the Wyoming opener and hitting it pretty steady for a few days until the bugs get bad and take the fun out of it. My new attitude makes it a lot more relaxing as well. Good luck in your own quest for the “brown gold”. 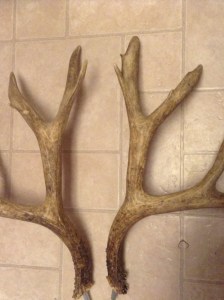 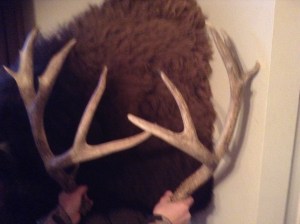 Getting in Mountain Shape
I mentioned in the beginning that I spent a little time dealing with Cancer in 2015. I won’t bother with the details but the effects of it and the Chemo on a body are far more than I ever imagined. But I am glad to say that finally the right combination of prescriptions seem to be keeping lingering issues in check. My joints are relatively pain free and I have clearance to begin an exercise regimen. I live in a very rural area with no gyms or trainers handy. I do feel like I need some guidance in this quest so I searched for an online resource. Eventually I ran across the Train to Hunt website. They mentioned online coaching was available so I dug deeper. Train to Hunt promotes fitness for the hunter and host several bowhunting themed “Spartan” like events around the country. The races look challenging. One of the trainers caught my eye because of her extensive training/ study and degrees in exercise science and rehabilitation. She is also a serious hunter athlete and associated with respected companies such as Wilderness Athlete, Kryptek, and Swarovski Optic. We made an appointment for a phone interview and afterward I knew Jasmine Johnson was the resource I needed. A coach can provide you a specific exercise plan, diet advice and most importantly: motivation. Having someone else to hold you accountable is a huge motivator. Jasmine has been great to work with and I’m sure is tough to keep up with in the mountains! My progress has been hampered due to my unique challenges but I‘m resigned to slow and steady improvement. The focus is to climb the mountain to the top, never quit and Stay at It! Most importantly I have my Coach to get me there. What I have learned from this association is that whatever your passion or goal, seek council of an instructor or coach! Be it long distance running or general fitness, resources are available to anyone at minimal cost. Video chats, emails and instantmessaging allow us to interact with everyone.
Why settle to remaining the same? Improve!