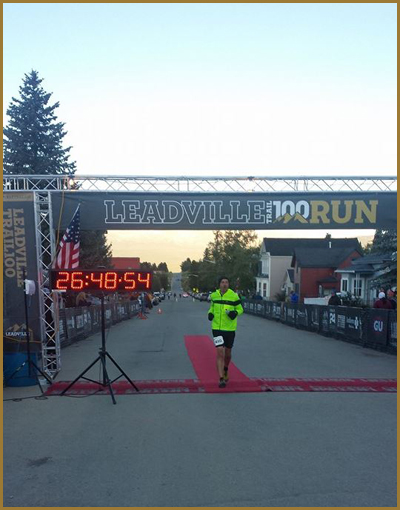 David crossing the finish line of the 2014 Leadville 100 trail run.

“I want one!” Those were the only three words I said as Cheryl and I were standing at the Leadville Race Series tent shortly after running the Bolder Boulder 10K in May 2013. What I was referring to was the large silver belt buckle lying on the table in front of us that read: Leadville Trail 100 – The Race Across the Sky.

This was no ordinary belt buckle….you simply can’t whip out your wallet and go buy one. No, this particular belt buckle you must pay for in blood, sweat, and tears while running 100 miles in one of the toughest races in existence…… not only that, you must complete the race in less than 30 hours. Anything over that, you go home empty handed.

The Leadville Trail 100 run takes place in Leadville Colorado, which is located at an elevation of 10,152’. It includes a double crossing of 12,600’ Hope Pass and the course has a total of 18,000’ of elevation gain. The race is typically limited to around 800 runners and 55% of them that lineup at the starting line….will not finish the race. That’s right, only 45% of the runners who have put in months, or even years of hard work training for this race, will actually cross the finish line prior to the cutoff time.

I hired a coach, trained hard for one solid year, battled a knee injury, but in August of 2014, I crossed the finish line of the Leadville 100 in 26 hours & 48 minutes….well before the cutoff of 30 hours.

Leadville gives out two belt buckles; a sub 30 hour and a much larger sub 25 hour. Although I was stoked that I had accomplished something that very few people have ever done, I was somewhat disappointed that I didn’t break the 25 hour mark. I was on pace to do exactly that, but I made the rookie mistake of not taking in enough nutrition…which ultimately caught up with me late in the race. As I continued putting one foot in front of the other as I made my way down the trail in the pre-dawn darkness, I watched the reality of a sub 25 hour finish gradually slip away. 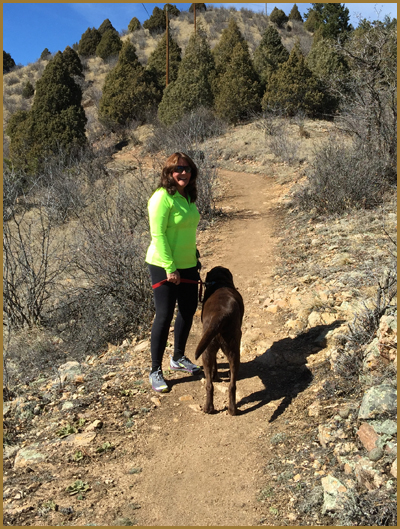 Cheryl getting in some vertical with her faithful companion, Romo.

As I crossed the finish line, even as bad as I felt and as bad as my body ached, I knew right then…..that I would need to return to Leadville at some point to have another shot at the sub 25 hour belt buckle.

The second journey this blog will be documenting is my wife Cheryl’s path towards her first race…the Leadville Heavy Half in June, 2017.

Cheryl has chosen not to run over the years due to several knee surgeries, one knee replacement, and knowing that she will need a second knee replacement in the future. With that being said, she has decided to sign up for the Leadville Heavy Half in June of this year. This race is 15.5 miles in length and has 3720’ of elevation gain and reaches an elevation over 13,000’ at the top of Mosquito Pass…..not exactly an easy task for someone’s very first race.

Always being on the side lines because of her knee issues has always been hard for Cheryl. This year, standing on the sidelines was not an option. Cheryl loves to hike, therefore, hiking the Heavy Half is an attainable goal. Some knee taping, a good pair of Altra shoes, and 3 more months of training will hopefully get her to her goal of doing the Heavy Half in 5 to 5 1/2 hours.

We truly hope you will enjoy following along on our journeys.