This chapter of the Legacy begins in June of 2014. It was a warm Saturday afternoon in my hometown of Durango. I was helping a family friend clean up from a garage sale that he was having when he looked up at me and asked, “Are either of your boys left-handed?” Having no idea why he was asking such a random question I replied with the truth and told him that neither Nate nor Cole was left handed but that I found out the hard way that Cole, my 12 year old, was left eye dominate. I had purchased him a right-handed bow and he struggled to shoot it. To my surprise, he said “Perfect, I have a left-handed youth model 270 I want to give to Cole under one condition… When he out grows it, it must be past down to another youth as it had been to his son. Needless to say, my son Cole was more than ecstatic to receive the rifle as he had drawn a third season rifle tag in Colorado for mule deer that fall. This would be his first deer hunt.

Opening morning found us hunting in fresh snow above 10,000 ft. We cover lots of miles and glassed many canyons turning up no sign, no tracks and no deer. It was obvious that the snow had already pushed the deer to lower elevations. That afternoon we dropped down below the snow line and hunted around 8500 ft. We hunted an area that I know holds lots of bucks. This area was hit by a forest fire about 10 years ago and we hunted hard along the edge of the burn. With the sun setting a major storm moved in unleashing lightning, hail and heavy rains. We booked it off the ridge without seeing a single deer. 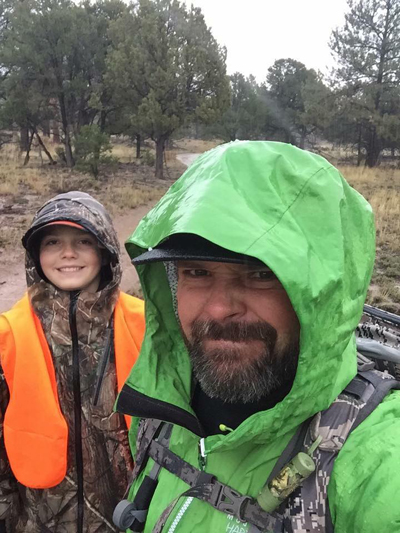 Day two started the way day one had ended. Heavy rains and a major lightning storm that kept the deer locked down and us in the truck. As the storm let up, we put on our rain gear and headed out hoping to catch some deer moving between storms. A few hundred yards up the ridge we cut some fresh tracks and decided to follow them. It was a great opportunity to teach Cole how to read and understand deer tracks. We discussed the possible reasons the deer were headed the direction they were and the possibilities of where they might be. Reaching the top of the ridge we found a nice spot to watch and glass the canyon the deer went into. An hour of glassing brought no sign of deer and as the distant rumble of thunder grew closer and louder we decided to work our way back to the truck. The rain came quickly and despite our rain gear we both were soaked. The mud sticking to the bottom of our boots not only made us taller but the weight increased with each step. Slipping and sliding our way down to the truck where we came across another youth hunter who had harvested a nice 150″ 4×4 with chocolate antlers. Seeing the success of the other hunter had stoked Cole’s passion and he stated that he wanted to harvest the first legal buck that we found. Making it to the truck we decided to hustle home, dry off, refuel and then head back out to a new spot.

With the storm from the last day and a half letting up, the deer were up and moving early. It didn’t take us long to locate a group of 11 bucks feeding in a grassy draw. Cole’s constant smile grew into an ear to ear grin full of excitement and nerves. This was far from the perfect setup. The 22 eyes combined with the open rolling terrain was going to make it very difficult to get within range. We were going to have to back out and circle 180 degrees just to get the wind in the right direction. After spending 2 hours circling the bucks and getting the wind in our faces we were finally able to make a game plan. The bucks were now bedded in the tall grass below us. To our left was a small draw where we could crawl and hopefully get within 200 yards. Taking our time, we covered the first few hundred yards on our hands and knees. The last 100 yards we covered on our bellies. I set up the shooting sticks 233 yards out. Now we had to wait for the buck Cole wanted to stand. The cold breeze and wet ground combined with 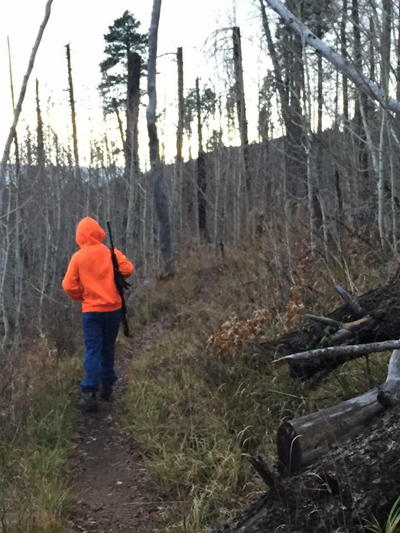 excitement of being set up on a good buck brought an uncontrollable shake to both of our bodies. The minutes seemed like hours and my mind raced with ideas of how I could get the bucks to their feet before shooting light faded away. As I sat considering our options, Cole nudged me and pointed towards the bucks. A couple of the smaller bucks had stood up and started to feed. I knew it the bigger bucks would stand and stretch shortly. With light fading fast we made the decision to shoot the first mature buck that gave us a good shot. The three biggest bucks were bedded off to the left of the group. Two of the bucks stood and began feeding towards us, offering no shot. The biggest buck rose to his feet, stretched and began feeding towards the rest of the group. Cole was ready, gun steadied by the shooting sticks. I calmly walked him through his steps. “Pick a spot, breathe and gently squeeze.” Even though I knew it was coming, the report and concussion of the rifle caught me by surprise. I could hear the hit but I missed seeing where the bullet struck. I told Cole to reload and shoot again, I could tell the buck was hit hard as he stood there hunkered up. The bucks didn’t know where the shot came from and began to get nervous and jumpy. With all the deer moving around, Cole could not get clear shot. The bucks moved off to our left and into a small draw. We moved forward to get a better view and bumped his buck who was already bedded. The buck was out of view before Cole could get on him and a few seconds later all of the bucks exploded out of the other side of the draw. One was missing. Working to higher vantage point we glassed the tall, thick grass as darkness settled in. Unable to locate the buck we decided to back out and return at first light, not wanting to push the buck any further. Cole was about to experience his first long, sleepless night.

First light found us glassing up buck after buck but not the one that we were looking for. Moving to a new vantage point I finally located the tall tines of the buck. He was bedded about 30 yards from where we last spotted him and to our surprise, still alive. The grass he was bedded in allowed absolutely no shot. We were going to have to get closer. Working our way closer and closer, we found ourselves less and 75 yards away still unable to get a clear shot. I tried to get the buck to stand by whistling and waving my arms but he just laid there looking at us. With no other option, I told Cole to get ready and we began walking straight at the buck. At a mere 20 yards, the buck exploded from his bed, Cole pulled the rifle to his shoulder and squeezed a shot off dropping the buck in his tracks.

The flood of emotions that went through my body at that moment is indescribable. Respect and honor for the animal that gave his life, pride and joy for my son and the values/morals that this hunt instilled in him and the happiness for the meat that filled our freezer all brought tears to my eyes. Sharing this moment, this hunt with my son will always be a highlight of my hunting career and the legacy that I create!

Since this hunt occurred, our local chapter of SCI has started the “Legacy Project”. Each year a local youth in need is given a youth model gun, a day on the range with an instructor and a mule deer hunt. We encourage the youth to pass along the rifle when they are older to continue the Legacy! If you are interested in helping with the Legacy Project or helping a local non-profit start their own Legacy Project, feel free to contact me for more info. 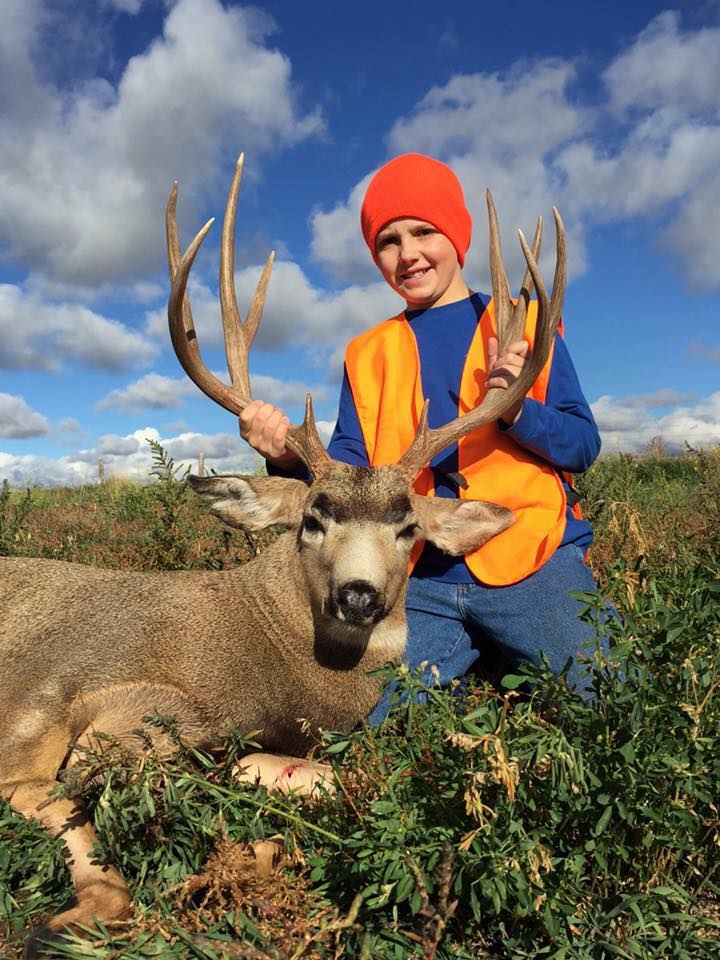